A Note from NYC…

Seriously. Why did I even decide to come here? I’m having a terrible time. Horrendous. DULL. End of post. 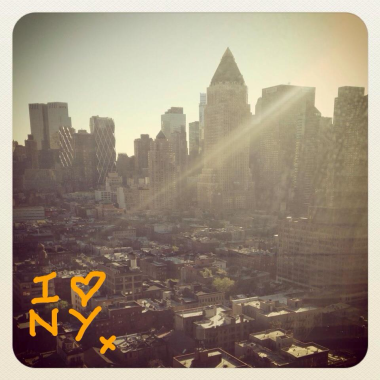 Well, in actual fact, I am trying to work out how I can miss my flight home. I feel a little guilty. My love affair with Paris was beautiful. But this? This is something different. The transition to NYC life has been effortless and Caroline and I are becoming slightly deluded, “What time shall we head home today?” As you can see from the pic above, our home has a pretty decent view and with Times Square just 3 blocks from the apartment, we feel extremely lucky. 3 blocks – sounds cool, doesn’t it? I’ve got to say though, the road numbering was a little frustrating at first. Its 425 west, 48th street in between 9th and 10th. Oh –  right there, of course! Now we’ve got the hang of it we have come to the realisation that it’s a much better system than London.

Before we even got to New York, the laughs had already begun. I made it to the Heathrow express ticket machine, where Caroline awaited me, approximately 7 mins before the train was due to depart. A very normal trait of mine (always Lastminute.com.) At the airport, we accidentally ate a huge dinner, forgetting that we would be getting dinner on the plane, too. Ah well, never mind – it’s not like we are going to a city where food is a big thing. Much.

When we went through to boarding, I passed over my passport and the lady behind the desk said that we had been upgraded. I smiled, nodded, thanked her and met Caroline further along the way where we discussed what had just happened in disbelief. We lucked out. The flight was great, especially with the surprise addition of the added leg room. I shouldn’t think it was a great flight for the others around us, mind. We spent the whole time trying to play, pause and rewind our individual TV screens at the same time. Hours of fun for us and despair for others.

In a mission to fight against the jet lag, we played the staying awake game. This was not easy for others as Caroline kept putting her individual light on (brighter than the sun) and I was coughing for Britain (the guy next to me wanted to kill me – I’m sure of it). I found a music section on my screen and made the most atrocious soundtrack to keep me awake.

We landed and made our way straight to our 42nd Street Airbnb apartment to crash. After a much needed rest we set off to explore walking all of the way from our accommodation to Soho. Once you got used to the red hand and white man to cross and learnt not to J-walk, it was easy. A lot of crazies on the streets, but London prepares you for this. We merely shrugged and let out an exasperated sigh when a man strolled past us walking his cat.

Our first stop was a Starbucks. Nothing like making it feel like home. At our second stop we had a coffee and a wine, naming no names of who went for the wine (but it wasn’t Caroline). One thing I noticed pretty swiftly was that I was seeing references to ‘Mothers’, ‘Mums’, ‘Moms’ everywhere I looked. Odd. You know when something is on the forefront of your mind and it follows you wherever you go? 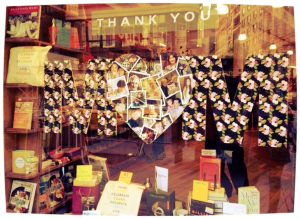 I soon picked up on the fact that it is Mother’s Day in the US on Sunday 12th May. It reminds me of the milestones and of why I started this project in the first place. I used to get anxious before big dates and so wanted to shift the focus of the day – Paris trip for mum’s 60th and launching this blog on Mother’s Day. It helps me massively to have a task, a challenge and something positive to focus on, on what has so much potential to be the most miserable of days. 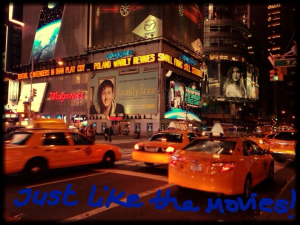 All in all, I am adoring NYC; chilling, wandering and soaking up the atmosphere. The shopping has begun, too. It really does feel a lot like one gigantic film set here – a cliché I know. You just want to put your headphones in and blast out your favourite song, powering down the streets with a swing in your step. I think I could live here very easily.

Coming home was already beginning to fill me with dread, until I heard about something particularly exciting to come back for. A colleague of my mum’s (Mum was a teacher and Head of Year in a Dorset Middle school) turned up at my dad’s school with 18 letters for me that have been written by some of the children from a Year 8 English class. They know about this blog and the 60 postcards project and wanted to write something. It brought a tear to my eye to say the least. It’s utterly amazing and I cannot wait to read them all when I get back.

I haven’t even got around to talking about the project and challenges yet! We have plenty of time for all of that excitement.

Everyone else – speak to y’all real soon.

This site uses Akismet to reduce spam. Learn how your comment data is processed.

There was an error retrieving images from Instagram. An attempt will be remade in a few minutes.