Even though it was a little far out – If I was in New York then it was a no brainer. There was no way that I was missing the ballet performance in New Jersey.

We’d accepted that the journey was going to be a bit of a mission. Off we went to Penn Station.

We missed our train by 1 minute. DON’T PANIC! Luckily for me I was with Caroline who is map reader and transport extraordinaire. Bish bash bosh – on the next train, quick change and we were at Radburn, New Jersey. We had PLENTY of time to get there. Feeling smug, we left the station ready to grab a cab.

Have you been to Radburn before? No, me neither. Let me set the scene…

No taxi rank, no people about but there was a petrol, correction GAS station across the road. The guys in the Dunkin Donuts shop would be able to help surely. In we went….

“Oh hello there. We seem to be a little stuck. We are off to watch a performance at Bergen Community College.”

“Oh yeh I went to school there. So you go up this road for a few miles then its a left and follow it round.”

“Well that sounds quite far and we are in a bit of a rush so do you have any taxi numbers please?”

The shock on his face! It was as if we were aliens. (Cheers Sting – I now have Englishman in New York in my head).

So yeh that thing they say about all Americans having cars. True story.

The petrol pump guy (official title) gave us a taxi number and I then relayed the wrong number to Caroline. Woopsy. Once I’d given her the right one and the guy on the other end of the phone had finished his speech on the British accent, we had a taxi driver named Hank on his way. 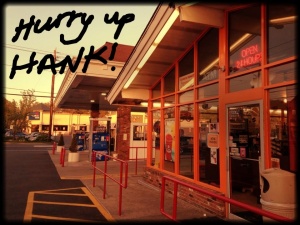 Hank was twice the time they had said he would be. Anger. We were now officially late. Feeling a little despondent we slumped ourselves outside Dunkin Donuts feeling like, well, complete donuts.

At last we were pulling up to the incredible Anna Maria Ciccone Theatre preparing ourselves for a hideous entrance involving a humiliating scramble for our seats. Imagine our relief when we heard that there were pre-performance speeches. We crept in and as we sat down the lights went down and the curtains began to open. 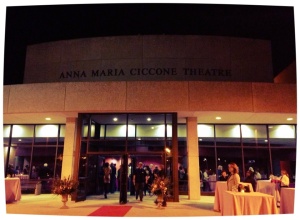 As soon as Steph came onto the stage I knew it was her and excitedly whispered to Caroline.

Steph is an unbelievably good dancer. She dances beyond her years and is such a huge talent. (It’s no wonder she had kids waiting after the performance to get their programmes signed.)

As I watched, the tears came. Tears of happiness from being there, tears at the beautiful work of Steph and the whole company and tears because I desperately wanted to call my mum and to tell her everything that I was seeing. I want to tell her about what’s happening, about the project and the story that I seem to be living.

Steph and I met and I felt instantly comfortable in her company. We chatted about the show, the Dance Theatre of Harlem and about how crazy it was that I was there because of a postcard. She talked about what she has coming up and was excited about heading off on tour soon. Jealous!

Not having much time after the performance and needing to get back to NYC we arranged another meet to catch up more which will come up in other ramblings of mine!

So there we have it. I am getting so many things from this project. This is something I will never forget.

I heard from the lovely Cassa Pancho (MBE) who is the founder of the company. I am off the see them perform on Saturday!

4 thoughts on “From Postcard Finder to Friend”