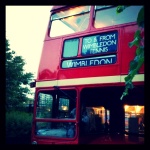 I think I just choked on my strawberries and cream. What. A. Day.

It was just last Tuesday, day two of the tournament, that I was lucky enough to visit SW 19, Wimbledon. One of my oldest and dearest friends (no- she isn’t 80 haha), Bethan, was successful in the ticket ballot and I was chuffed to bits when she took me along with her. This was a lovely walk down memory lane for us as we used to go with school many years ago. Our claim to fame is that Bethan and I were once interviewed by Swedish TV. Of course, we never saw this aired. Probably a good thing as we seem to remember talking about Lleyton Hewitt a lot. I think we focussed more on how much we fancied him than on how he played. On second thoughts, it probably didn’t get aired at all. Ha.

We got to see 3 epic matches on centre court last week – including Djokovic (who I remember thinking looked unbeatable – HA). I must say, though, that the people who impressed me the most were the ball boys and girls! It was like choreographed routines – so professional.

Bethan and I chatted about how much more fun a game of tennis would be if you didn’t have to trundle around collecting the balls. ‘Trundle’ gives you a little insight to the pace of my game. An umpire would be handy too. I’m forgetful. A game could go on for hours with me – I get lost in the score! Wow – Laura Robson move over. I’m going for a wild card entry next year.

Tennis was a big part of our childhood. Dad was an LTA tennis coach for years, working at evenings and weekends, on top of his teaching job, so that Mum could be off work for longer with us girls. Every Saturday morning I would go along to his group lessons. Some of my friends from school would go too. They all thought he was a legend, but because the coach was my Dad, I didn’t make as much effort as I could have or should have. Shame – teenage brat, haha.

I have only played here and there over the last few years. When I have played, it has been with my friend Antonia (Bethan’s Uni buddy). It always makes me giggle as we plan to go for a hit for exercising purposes, but actually end up having a hit whilst shouting at each other, catching up on the latest gossip. “NO WAY – seriously?!” I shout as I smack the ball into oblivion, distracted by the news.

In October half term my family used to go on a tennis and golf trip to Le Manoir de Longeveau in France. Fantastic times. The girls and I have a great memory of Mum from one of those weeks. We had been out playing table tennis, drinking some bierre and vin rouge, and decided to invite friends back to our gite to carry on the evening. After about an hour it was time for everyone to head off. As we closed the door to the last of the friends, the bathroom door creeps open. Mum had been in there the whole time but was too embarrassed to come out as she was in her pyjamas. Hahahaha. Bless her :).

Sunday 7th July is now a day with a firm place in the history books. Andrew Murray, the fighting Scot – he did it. Wimbledon Men’s Singles Champion 2013.

I was down at Dad’s to watch it with the family. I’m so glad I did. We are a slightly nutty bunch, therefore, it was full of silly moments (as ever).

Not wanting to miss a minute of sunshine, Sarah decided to watch it on an iPad outside. She was about one minute behind us and just by the door – unbeknownst to her, we could hear everything! Luckily the Internet was playing up, she had to come in. Phew!

I can’t tell you how many times Dad shouted, “You HAVE to make those first serves!” Pipe down coach! Hannah suggested the use of the underarm serve. Interesting. Ha.

We all decided that Murray’s girlfriend, Kim, fully deserves a contract with Loreal – seriously have you ever seen shiny locks like it?!

We discussed hat-gate – should he wear one, should he not? Oh, now who is bloody who?

We cheered for Bradley Cooper and Gerard Butler. What?! It was in the spirit of sport. Not because they were looking ridiculously handsome. Pfft.

The funniest moment was when Hannah stood up and announced that she was going to check the BBQ. “HANNAH – Sit down and shut up, it’s CHAMPIONSHIP point!”

And then it happened. The room erupted and we had witnessed the first British champ in 77 years. I felt proud. And you know what, yes – it’s great for British sport. Yes – it brings the nation together. But above all, I’m happy for Andy.

As I am writing this, I have received a message from Hannah. It must be sisters intuition! Hannah’s message reads, ‘The first Brit to win Wimbledon in 77 years….unless women are people too…Virginia Wade, Ladies Singles Champion, 1977.’ Point taken!

You may be wondering why I have named this post ‘Game, Set, Love Match’. (Email and twitter followers will just be impressed that I managed to send this post with a title 😉 !) Is it because ‘love’ is in the tennis scoring system? Is it because ‘Love’ was my Mum’s maiden name. They are just happy coincidences. It is because it was at Saturday club afternoons at Tynedale tennis club, that my Mum and Dad met for the very first time.

I have a lot to thank this sport for :).

Right, I’m off to work on my cross court forehand…..speak Friday!

P.S For more on the world of tennis (and a bit of rowing too) i recommend that you check out Bethan’s brill blog, All in a Topspin!

Letters from the kids:

Thanks Annie :). So lovely to hear that Mum was able to show her true character at work! She did enjoy a good laugh and ‘warm hearted’ is spot on. I hope you are enjoying the sunshine!