During the last week, I have found myself explaining 60 Postcards to people for the very first time. It’s tricky, you know? So much has happened since this project began on Mothering Sunday, March 10th, that I am finding it increasingly tough to condense it into a few points! Naturally, I don’t want to miss a moment. It’s time for a recap post, people.

Readers who have experienced the journey from the beginning – this will refresh your memory!

Readers joining now – this will give you a glimpse into what I have been up to!

Me – well, this is going to help me to organise my thoughts, to give me a chance to reminisce and to allow me to direct people asking all about it to a succinct summary of the story so far! Here it goes…..

WHY DID THE PROJECT START?

February 11th 2012 was the day that I lost my beautiful Mother to cancer. Almost every single person and family on this earth is affected by this despicable disease in some way. I was utterly fed up of the milestones, of the reminders so In December of last year, I decided to try something different. I created a personal project around the date of what would have been my Mum’s 60th Birthday. I wanted to spread the word about her. I started off by thinking that I would leave notes around a city in her memory. I then took it a step further. What if I could ask people to respond to me? I hand wrote 60 postcards with my email address at the bottom asking the finder to get in touch. Now, where did I go?

The last gift that my Mum gave to me before she passed away was Eurostar vouchers. I had never been to Paris and had been longing to for years. This would be the chosen city. Off I went with 11 fantastic friends to celebrate, to enjoy and to scatter my words. We filled our time with sight-seeing, food and drink and laughter. Oh and we danced with buskers (as you do). When I returned to my London home, I tried to switch off. Switch off from the thought that I might actually hear from a postcard finder. And then, they started flowing in……….. 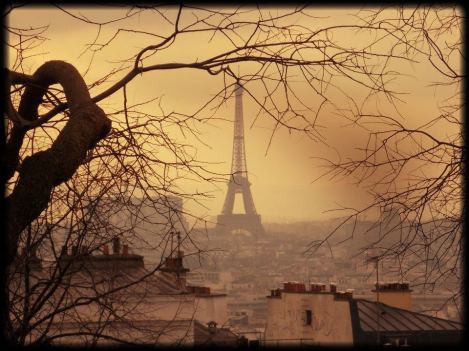 These ladies sent the first email. I yelped on the London Overground. Not cool. But actually, it was my first response from Paris! Very cool.

Cafe deux Moulins in Montmartre, none other than the Amelié café, was where I had left my first ever postcard. This was Alexandre’s local spot for his coffee and he found it on a table outside!

Ivan, originally from Luxembourg, was browsing for a textbook when he happened upon my handwritten note, sticking out of the shelves.

In a moment of disappointment, realising that I would not make it to the top of the Eiffel Tower, Becky, Ellie and Pam saved the day. I bumped into these girls and after reading my message as I walked away, the next I heard from them was an email response with a photo of it at the top!

A bookshop delivers yet again. New York City Ballet dancer, Stephanie, found this one whilst on a visit to see a friend in West Side Story there. She even took it back to NYC with her!

This one came as a shock, a little later than the others. Dan and Helen were running the Paris Marathon and found it in the apartment that we had stayed in!

When I wrote on the postcards, ‘I will document this in a blog’, I don’t think I acknowledged at the time what a gamble that was. I genuinely wondered if the blog would ever start. I was relying a lot on strangers picking up handwritten notes. It really does sound mental now. Even if I had received only one, I would have had to set it up. I owed it to the finder! Luckily for me, not only did I receive the postcard responses, but the stories with them were so special that I felt that I simply had to share the magic. After a 2 hour blogging workshop, I was ready(ish) to let people in on my 60 Postcards project. Family and friends were following and then, after encouragement from friends, I decided to chance it and send an email to Stylist. A lovely mention in an Emerald Street email helped to spread the word and more readers joined me for the journey. It was perfect timing. My next location had been chosen……. 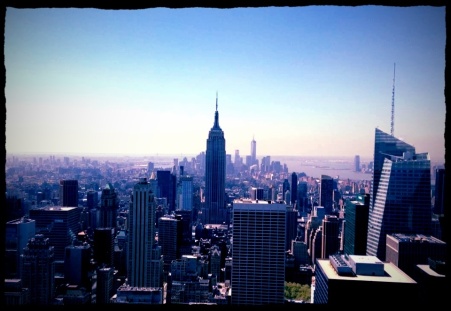 Well, as if I was going to stop at Paris!!! Caroline (friend and Paris crew member) and I were thinking of locations for a long weekend away and there was only one place on our minds – NYC! I packed my pants and my postcards and off we went ready to embark on more mayhem and exploring a new city. ‘It’s just like the films’, I thought. A cliché, but it’s the truth. We saw some hot spots and tried some local haunts too and I wasn’t too keen on coming home, as much as I really do love London. By far my most special (and most bonkers) moment was when I was sat in a Theatre watching Paris postcard finder, Stephanie, perform!

This email came to me the very night that I left the Postcard on an NJ Transit. Malika had been hanging out with friends in NYC!

Annabella, a student in NYC from Miami, was shopping in her favourite store when she found my Postcard sticking out amongst the stiletto heels.

Now this one, this one blew my mind. Of all the potential postcard finders, the one from the Rockefeller building (Top of the Rock) was none other than, Amelié from PARIS! What! Yes. Woah.

I am yet to crack the code of this one, but someone in Denmark found this postcard at the Hans Christian Andersen statue in Central Park and contacted me in Danish. I’m still working this one. Determined to find out more!

With some help from my readers, Team 60 Postcards, I asked for a little assistance with an idea for an extra challenge for my NYC trip. The chosen idea was Project Inspire! I asked 16 people to hold a sign saying ‘I heart NYC’ and to tell me about someone or something that inspires them. I called on a little help from the family on this one.

I am plotting a return to Paris. I now have unfinished business – Project Inspire needs a trip to France!

Oh just a few more things I have chatted on about….

BLOG STATS – Then vs Now

It is not just the journey of the postcards that I am talking about on here. It is also my journey of the loss of my Mum. This is a legacy and a gift from my family and I to her. I have not held back at times, telling you exactly how I am feeling or have felt in the grieving process. A process that never ends but is explored and dealt with in ways that are completely different for us all. This was the most difficult part, of course, for me to share. I worried that it may scare some off and perhaps it has. But, the incredible feedback that I have received from you has assured me that I made the right choice. I want to show that it really is ok to talk about these things.

Erm, NO. The most exciting thing about 60 Postcards for me is that it doesn’t have an ending. Who knows what will happen next……

To read this story from the very beginning, a very good place to start….click here.

Speak to you soon when I really (really) will tell you about that visit to Greenford High school!

It will not be long before I reveal another postcard response! It’s the return of the cliffhangers – wahaha (insert evil sounding laugh!)

Ciao for now Team 60P – thanks for reading and sharing. I ramble on post after post but I struggle to explain just how much this means to me. So much.

P.S Don’t forget to email me your photos of you (and friends and family, if you like) holding a postcard and telling me about someone or something that inspires you. Your own Project Inspire! Email: 60postcards@gmail.com.