If this is your first visit to 60 Postcards, please see my guest post for SkylightRain where it summarises my story so far.

My new weekly blog routine means that on every Tuesday I write about my 60 Postcards journey (see my last post for book reader tales), and on a Friday I share a story of an inspirational person, project or cause. Today’s post involves all three of those things.

I am introducing you to brothers, Rob and Paul Forkan, who have a fresh and exciting business called Gandys Flip Flops. In just eighteen months, Gandys is growing from strength to strength.

The Tragic Reason Behind the Venture…..

Rob and Paul grew up in Croydon in South London with Mum and Dad, Kevin and Sandra, and siblings, Mattie and Rosie. With Kevin and Sandra as ‘compassionate, adventurous, generous people’ with a strong passion for travelling, it was in 2001 that they decided to take the kids out of school and “enrol them in the University of Life” – keen to show their children the wonders of the world.

They stuffed their backpacks with as much as they could carry and the Forkans set off on an adventure to work on humanitarian projects – heading to India for their first year and then moving on to Sri Lanka for the next phase of their journey. They found the perfect place to stay for Christmas in a tiny town named Weligama but the year was 2004 and it was on Boxing Day that the Forkan’s lives changed forever, as they found themselves in the centre of the horrendous Tsunami.  All of the children made it to safety, but Mum and Dad were unable to.

There is no way that anyone could imagine how Rob, Paul, Mattie and Rosie must have felt during that time, nor comprehend the strength and courage it must have taken for them to get themselves back to Croydon to the support of friends and family. And Rob and Paul, on finishing their education, even set off to complete the mission their parents started, by travelling the world again. But the tribute would not stop there….

The lads said, “we we

re determined to turn our personal tragedy into a force for good”, so the brainstorming commenced on how to come up with something that would honour their Mum and Dad’s memory, while linking it to the mission they had embarked on when the tragedy happened. When the Forkans had been travelling they had spent time with children less fortunate than themselves and the guys wanted their idea to have the aim of helping those kids.

I couldn’t help but smile and laugh when I read that the brand name ‘Gandys Flip Flop’ was created from a festival hangover. You’ve been there – I’ve been there (far too many times) – when you wake up and you mutter the phrase “I’ve got a mouth like Gandhi’s Flip Flop.” And that is where the first discussions of a new Flip Flop business began. Fashion footwear but with some of the proceeds going towards the development of orphanages. A perfectly fitting tribute was born.

They set up the Gandys Foundation alongside their new business and 10% of all of the profits made go into it, supporting “disadvantaged children in need of basic essentials such as shelter, nutrition, medication and education”, with the mission statement of “Orphans for Orphans”.

Getting Others on Board…..

When I got in touch with the c 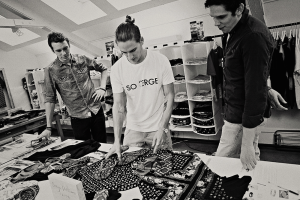 ompany to give a heads up about this blog post, I was delighted to hear back from Hannah, who during a lovely exchange (involving me raving about my passion for the project), explained that just eighteen months ago the business was being masterminded from the lads kitchen in their Brixton home!

It is no surprise that since then, the boys have three awards on the shelf, a vast amount of media coverage and a growing celebrity following. This project is undeniably one that so many people will want to get on board with (me included)!

They are now involved in several collaborations and I believe it was the one with Serge DeNimes that first introduced me to Gandys Flip Flops. Serge DeNimes is the brainchild of, none other than, Oliver Proudlock – who despite being first known for his Made in Chelsea (who am I kidding, ‘MIC’ – I’m an avid watcher) fame, has also been making his solid mark in the fashion world with his urban fashion brand. £2 from every pair sold online of the Serge DeNimes range of Gandys go towards the Gandys Foundation.

Other collaborations include Accessorize and Liberty and they have even got Richard Branson on board, with the name of their red Gandys Flip Flops changing to ‘Necker Red’ (Branson’s Island) as a thank you to the entrepreneur. (Every visitor to his island even receives a pair. Still waiting for my invite…..)

Do I have a pai

r of Gandys? Naturally, I have ordered a pair from the Serge 4 Gandys range in Peacock White! And in buying them to support the project (and in an attempt to look a bit cooler) it has encouraged me to think about a mini get-away this summer to show them off.

There are so many things that we can learn from Rob and Paul. Another reminder that life is too short and to embrace every opportunity. On top of that I think they are fantastic role models for anyone embarking on creating a social enterprise.

While researching the lads, I was interested to learn from interviews that they faced a lot of cynicism about their idea at first. But they followed their instincts – they have followed their dream – and in the process they are inspiring and helping people with every footstep their footwear takes.

Forkan Family – this one is for you,