60 Postcards: Create. Share. Inspire. Bringing you news every Tuesday on the ongoing 60 Postcards journey (you can read a summary of the story here), and on Friday I share a story of an inspirational person, project or cause. 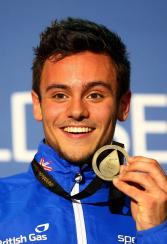 Happy Friday to you. What a week it has been! The 60 Postcards meet up on Wednesday was a wonderful evening (more on that next week), the sun has been shining brightly and my beautiful pair of Gandys flip-flops arrived through the post safely. Lovely.

I think the title of this post is a bit of a giveaway as to who I am talking about this week. I think it is definitely important for me to cover some of those in the public eye who are making a massive difference. Tom Daley is an inspirational one to talk about.

We first knew Tom as the committed, talented GB Diver, and then we recently saw him hitting the headlines as he made the brave move to talk about his sexuality – beating the media to it and making sure he said it in his way. All of this is a fantastic sign of the strength this young man must have – he has become a role model to so many and rightly so.

It was actually the documentary I watched just before the Olympics in 2012 on Tom and his family that left me a blubbering mess and, more importantly, feeling an overwhelming sense of pride for this national treasure. Though, some people may not know what he went through with his family just a few years ago… 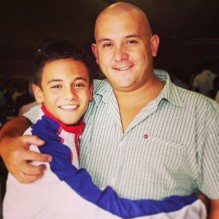 Tom’s father, Rob, was his biggest fan and was just so, so proud – following him all over the world to support and cheer him along in his training sessions and competitions over the years. In 2006 Rob was diagnosed with a brain tumour but after an operation he was put in remission. On a check up in 2010 they received the horrendous news that the tumour had returned. Rob fought as hard as he could and continued to make as many appearances as possible at Tom’s events, but in 2011 (at the young age of 40), Rob lost his battle to the disease (14 months before Tom hit the diving board at the Olympics).

Mum, Debbie, Tom and his two younger brothers, William and Ben were left completely devastated. And to watch that documentary just showed how strong they were (and are) as a unit. I couldn’t help but focus on the a clip where they were talking about the cards and letters of condolence they had received. They were storing them in the exact same boxes as my family had done. Although that was undoubtedly a trigger of emotion, it made me feel very grateful for the time I had with Mum. Tom was only 17 years old when he lost his Dad. Just so young.

Following the death of his father, Tom went on to nail his A-levels and then to make his family and our nation proud by grabbing the bronze medal at the Olympics. But he did not stop there. Tom became a patron for the Brain Tumour Charity and has recently embarked on an incredible set of challenges, documented by ITV2 through the show, Tom Daley Goes Global. Tom jets off around the world to do a skydive in Thailand, a paraglide in Japan, a canyon swing in New Zealand, flies a fighter jet in Australia, does a bungee jump in Switzerland and repels down a gorge Morocco.

“I had a great time travelling. To say some of the challenges were a little scary is an understatement, but it’s nothing compared to what 9,000 families go through each year when a loved one is diagnosed with a brain tumour.  I’m hoping that with your help, we can make a real and lasting difference by fundraising for The Brain Tumour Charity’s research programme. They need to raise at least £5million each year to fund research across the UK to find better treatments, improve diagnosis and ultimately find a cure. Brain tumours are the biggest cancer killer of people under 40 in the UK, and it’s only through research that we will be able to prevent other families going through what we have. “

Tom is not only a real family guy and so committed to his profession, but he is also using his strong, adored and respected status in the media to raise awareness for such a great cause.

I salute Tom and look up to him as someone who is setting such a fantastic example to others.

Have a great fun-filled weekend and I will speak to you Tuesday.

A lot of love,

PS Check out his JustGiving page for the Brain Tumour Charity.