Bringing you news once a week on the ongoing 60 Postcards journey (you can read a summary of the story here), and on Friday I share a story of an inspirational person, project or cause.

Last weekend my Dad (along with five great friends) took on the brave and inspiring task of cycling 202 miles from London to Paris for Cancer Research UK, in memory of my wonderful Mum. I knew the journey would be full of stories. Who better to tell the tale of the Tower to Tower Cycle than my Dad himself. Paul – it’s over to you………….

And so, the moment had arrived. On Wednesday evening, Watto picked up the minibus with his wife Jan (who kindly agreed to be the driver) and loaded the bikes. We attended the Rising Sun garden for final arrangements and necessary hydration.

On 5:30am Thursday morning we made our way to Tower Bridge, met Rachael for photos and to collect the postcards and then we set off on our adventure. Two hours later we were somehow still well north of the river and the GPS device (which cost a fortune) was not working!

Finally we made it to Greenwich tunnel and while riding we all had to dodge and swerve to avoid something rather unpleasant on the ground. But, we then emerged the other side to see the splendid Cutty Sark. It was large, bold and striking – steeped in history. It was funny how Gemma missed it. She said it was because she was so focused, but somehow she had definitely not missed what was on the ground on the way through!

It soon became evident that the military style organisational skills of Nation and Watto were manifesting themselves. So many plans, so few conversations. So many ferries, trains and cabins booked which were cancelled then re-booked! I can see it now – ‘Watto and Nation Communication Company extraordinaires!’ We crossed over the M25 and felt we were heading south. Not before, however, Gemma had the first puncture very swiftly reported by Watto.

Then we really started spinning; Adam in his Yellow Jersey, Tom totally relaxed (covering ground effortlessly), Paul going for ‘Downhill Nutter of the Year’. Watto was getting his calves pumped and Gemma was gliding. Oh yes, and then me! To try to speed me up they had leant me Watto’s son Paul’s road bike. That was great – I appreciated that a lot. But, we didn’t quite manage to sort out the pedals in time. Road bike – yes. Pedals – not so much!

We got stuck in and racked up some miles in very hot weather and arrived at a pub for a pit stop. We promptly ordered thirteen pints of lime and soda. Well, they were gone in a very short space of time. I gave the Irish Bar man a postcard before we left.

A strange thing happened after lunch as we came to Lower Addlington. It was fine going down into it but coming out, oh my goodness. This was when we encountered ‘Beat Box Tractor Man’ (BBTM) which was a chav on a huge chunk of a bike with a beat box on board, who over took all of us on the way down. Watto, ready to take him on the ascent, was amazed as BBTM pulled away from him. At the top he was not even out of breath but wanted to join us on our trip to France. I only heard about this. I didn’t meet the guy as I was pushing my bike up the hill at the time. The only consolation for me was that I was catching Watto up (even though he’d managed to stay on his). We made it to the top and, back as a group, we were ready to go again. The next hours were tough as we made our way to Newhaven and it became apparent at this point that we were falling behind schedule.

When we did arrive in Newhaven, Watto and Jan had to head off to Calais to go over in the minibus. We had a ‘Brewers Fayre’ beer and bite after changing at the Supermarket. We were finally on the boat. We had two cabins which we wanted to split fairly. Well, I ended up in one to myself and Paul, Tom, Gemma and Adam were in the other. (Paul has roomed with me before. He knows of my snoring!)

When we disembarked at Dieppe there was sight of the minibus but poor Jan and Tony had not slept at all. They’d had to catch a later ferry than planned. Things go wrong but you have to get on with it (Assembly #1 for next term!). And they were great – no moaning at all.

We were hit with a new sensation of cold damp mist in the air at 04:00am the next morning and off we rode down the impressive Avenue Verte. All six of us were spinning freely. We caught site of another cyclist and there was excitement in the air – on the horizon was a large man on a bike in a Heinz Baked Bean t-shirt! Middle aged, perhaps older than us – what the hell, we were going to take him! At breakfast, after seeing him a couple of times, we gave him a postcard and he had kindly handed us a tenner for sponsorship.

We later arrived at our destination town (can never remember the name of it) and had lunch and beer. We booked into our quirky hotel and all had a sleep before re-convening on the hotel patio for a pizza and a few bottles of Leffe (Watto loved those!). We met a man called Eric who was cycling from the middle of England to the middle of France. We handed him a postcard, naturally!

The next morning it was off to Paris. It was a long cycle. We met Irish Paddy and Aussie Bruce who were very sociable and joined us for some cycling. We stopped in a town and Jan and Tony met a religious man who was travelling from the Czech Republic to Ireland just with a fold away bike and all of his belongings. We continued on with a few breaks along the way and eventually shared a meal with the whole group.

And so, to the final day. Watto looked the business initially until he put his flip-flops on his back and then he looked like he was going to take off! Paul had planned a route which kept us fairly clear of Paris traffic. The moment when the Eiffel Tower came into view was a significant one for us all. As we were cycling in, Watto and Tom ended up joining a Pelaton around the City of Love and we lost them for a while. But we all came together at the infamous Eiffel Tower. We were delighted that we made it! After a meal nearby we caught a spot to watch the cyclists in the Tour de France, showing us how it was done. What an incredible weekend! 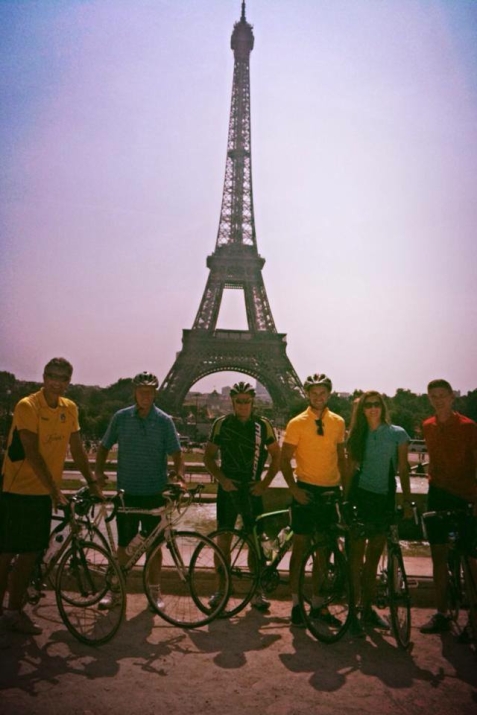 Congratulations to Dad and the team. What an incredible challenge for a fantastic cause. Mum would be so, so proud.

I spoke to Dad about the postcards on the phone the other day. It really took me back to when I was waiting for my first response. I could hear myself through his words, ‘We haven’t heard from anyone yet, have we? That would really make it – getting a response to a postcard’. I explained that I’d had the same fears, that you have to trust that people will get in touch in their own time. Approximately 30 minutes after that call, I received an email. Two email responses now in plus an anonymous postcard finder donation! MAGIC! Look out for more about those on the 60 Postcards Facebook Page.

Enjoy your weekend, all!

(It is not too late to donate a pound or two. JustGiving link. Thank you!)

This site uses Akismet to reduce spam. Learn how your comment data is processed.