Bringing you news once a week on the ongoing 60 Postcards journey (you can read a summary of the story in Glamour Magazine, here).

I returned from NYC a little while ago and, as promised in my last post, from here on I will be blogging about some of the postcards that I scattered around the Big Apple on behalf of other people – a mission of remembrance that I feel so honoured to be a part of. 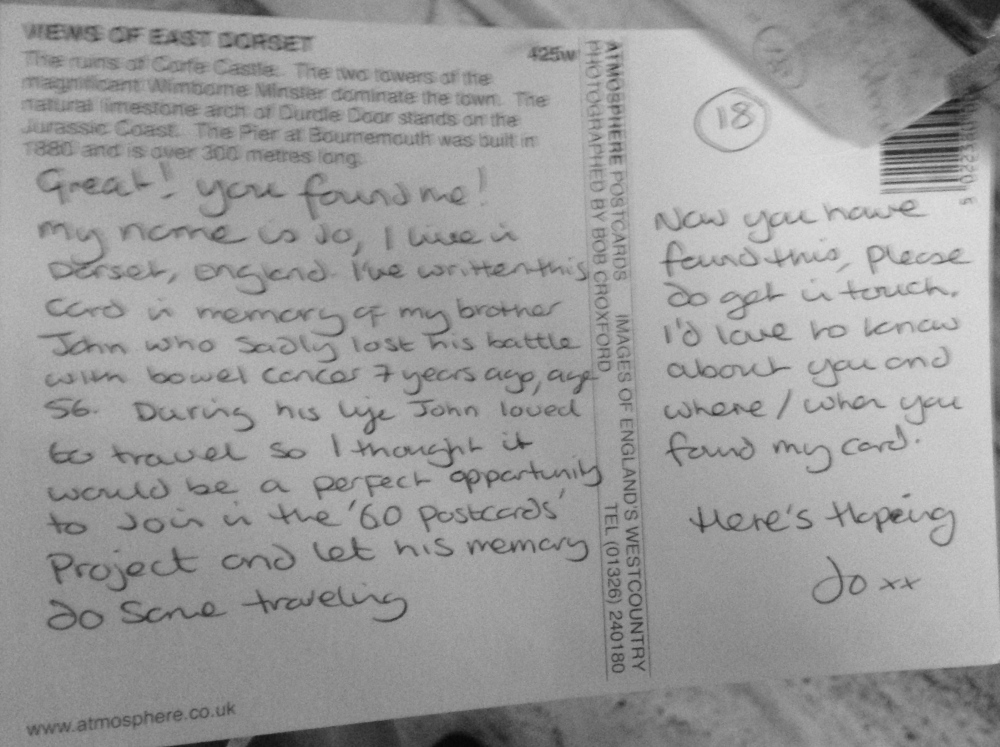 “Great! You found me!

My name is Jo, I live in Dorset, England. I’ve written this card in memory of my brother John who sadly lost his battle with cancer 7 years ago, age 56. During his life John loved to travel so I thought it would be a perfect opportunity to join the ’60 Postcards’ Project and let his memory do some traveling.

Now you have found this, please do get in touch. I’d love to know about you and were/when you found my card.

Jo has followed the 60 Postcards blog for a while now and I was excited to see her at the Wimborne Literary Festival talk last week, which prompted me to begin with the story of her postcard in memory of her brother. Jo’s letter was so honest and heartfelt, explaining about her brother’s wonderful character and love for living life to the full. I really wanted to find the perfect spot for his tribute.

As I mentioned briefly in, The One Where 60 Postcards Hits NYC, I had contacted NYC blogger, Ashley, before the trip. Ashley and Sara are two friends that set up a lifestyle site called Wanderlust in the City (Website, Facebook, Twitter) and I came across it as I was searching for tips about the city. I decided to reach out and get in touch as I thought that with their knowledge of NYC, they may be able to lend a helping hand.

Ashley and I met near her office and headed straight for the nearest Starbucks so that we could have a chat and make a scattering plan. We picked out Jo’s postcard and, with her words about John’s love for travel, Ashley suggested we head for Grand Central Terminal. It was the perfect place – such a transient hub – full of history and buzzing with travellers and tourists.

We stopped for a couple of photos outside the front of the station. There was a lady close by who was curious as to why we were doing that – assuming that we must be tourists. I explained that I was from London, Ashley explained that she lives in NYC and when the lady then asked how we knew each other – Ashley and I glanced at each other and laughed as we realised that unless she had a spare hour, it would be difficult to explain the whole story. Photos done – it was time to head in to the station.

We stood looking over the main concourse, scouring the area for the perfect postcard spot. There was a row of ticket booths and some of them were not open for business at the time. I had attached a piece of ribbon to the card so we were able to tie it to the railing underneath one of the booth windows.

Just as Ashley explains in her blog post about our day (60 Postcards in New York City), the hardest part for us was to walk away without looking back. Our scattering had been seamless, however, my goodbye with Ashley was not as I managed to spill coffee on her as we hugged goodbye (sorry again, Ashley!).

I feel honoured that with John’s love of travel, the memory of him could travel with me across the pond and was left in a place perfect for him. I have no doubt that Jo’s words on that postcard have been read – by one or by many. I haven’t had a response from a finder, but you just never know.

Jo and family – thank you so much for being part of this.

One thought on “Grand Central Terminal: A Postcard for John”